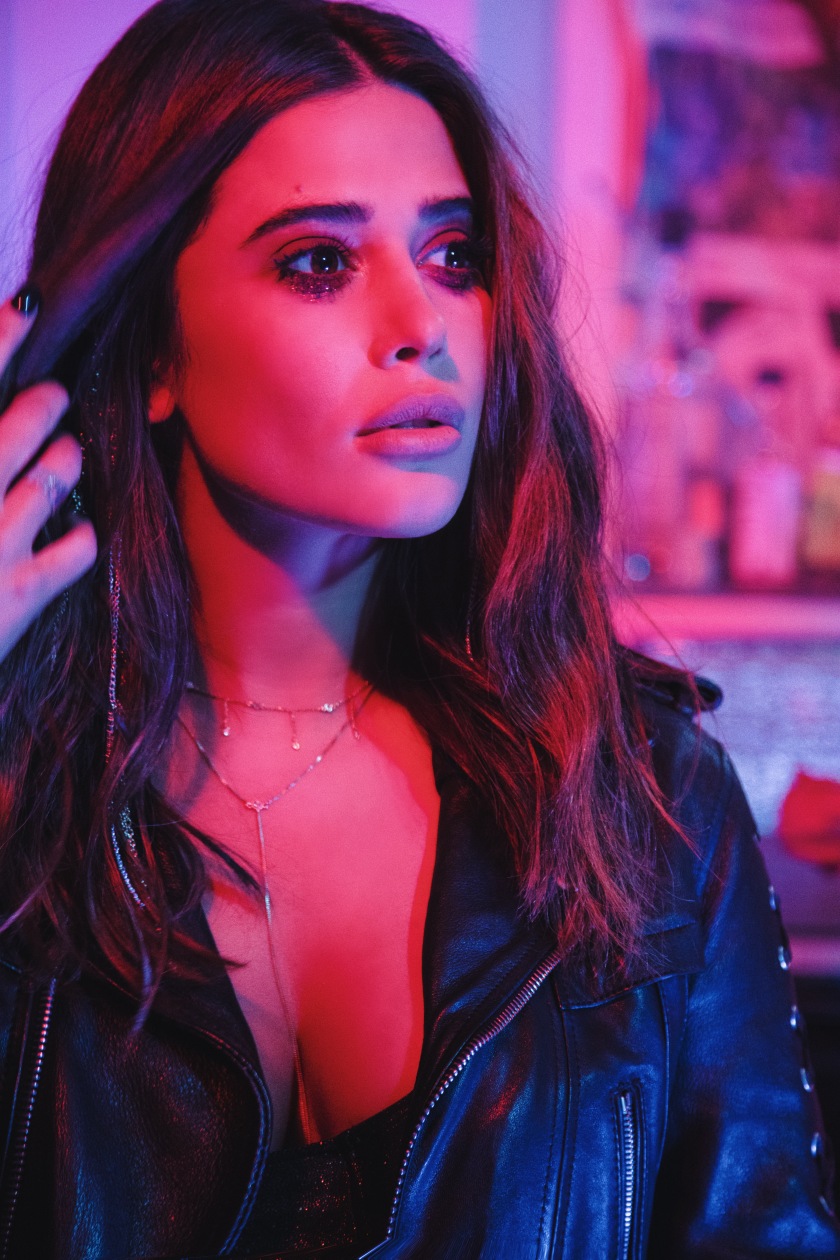 Up-and-coming recording artist Symon is making waves in the music industry with her “off-center” pop stylings. Between recording her debut album, set to be released sometime later this year, and co-hosting SiriusXM’s Hits 1 in Hollywood, Symon has had an extremely busy year and has no plans of stopping any time soon. I caught up with her to talk about everything from her new music to her love of Hello Kitty and everything in between. Keep scrolling to read our entire interview.

First off, I love your name, especially its spelling. Where does it come from?

Symon is actually my mom’s maiden name and it’s spelled just like that. It’s our family name and I copped it, I took it.

What age did you take the step into making and performing music?

I actually started at a very young age. I always knew that this is what I wanted to do. In my first grade yearbook it says, “my dream is to be a pop-star.” [Laughs] School wasn’t easy for me, necessarily, when I was younger. I remember the second I stepped into my first music class in elementary that something was very natural about that for me; it was very organic. Music then became my escape, and I knew that I wanted to make that escape my reality. [After that] I just got my hands on any type of musical thing that I could such as music classes or vocal lessons, any type of school performances. Then I started getting every lead in elementary school, and then I started doing performances outside of school and getting leads with different theatre companies, and I was studying Shakespeare and musical theatre. Then in high school, I was getting every lead and I was like, “This is what I want to do. This is it.” When I was about sixteen, I started a pop-rock band in my garage with these two brothers, and we were called The New Officials. We had a lot of awesome success, but I ultimately knew I was destined to be a solo artist, to write from my perspective, from my heart and really dig deep into who I am and express that on a platform. That’s basically kind of how it all started.

Speaking of musical theatre, was there ever a moment you considered going that route instead being a recording artist?

Yeah, absolutely. As a kid, I was like, “Wow. I really love this,” and I was studying “The Great American Songbook” and all the Broadway songs. I was like, “Maybe I should go in to Broadway.” But there was just a calling in me, in a very young age. My first album I got was Britney Spears. I was so young, and I remember as a kid I would sneak over to the TV, and I would put on MTV and I would watch TRL. I would study the artists when they were hosting, and then I would study their videos. And they were like characters but they were just themselves, and everything was just so much bigger and you got to play characters in different songs, and it was just like “Oh my god. Wow.” I became obsessed with that whole thing. At a very young age I was studying pop artists, and I love pop music. I love Top 40 music. But throughout my journey, yeah, I’ve definitely played with the idea of “do you want to do musical theatre” and what exactly it was that I wanted to do. But by the time I was thirteen, I was honestly like, “No. I definitely want to be a recording artist.”

Speaking of your love for Top 40 music — what are you listening to on repeat lately?

Right now I am listening to a ton of Dua Lipa, a ton of Halsey, Diplo. They’re my vibes currently.

Going back to the start of your career, is there any experience you would credit as the moment when you knew making music was what you wanted to do for a profession?

I have to tell you, since I was so small I knew that’s all I wanted to do, so it has been in my brain forever. But I think one of the most pinnacle and incredible moments so far that was really just like, “Wow. Oh my god. This could happen” was when my first single, “Say,” came out and I heard it on the radio for the first time. That was just such a surreal, crazy moment. I was like, “This is it,” and it was all I ever wanted it to be.

On the topic of your music, you’re currently working on your debut album, right?

It’s been amazing, it’s been heart wrenching, it’s been beautiful, it’s been scary, it’s been exciting. It’s just kind of everything. You are digging deep in yourself and, you know, I’m in my twenties and your twenties are really rough, whether it’s with dating or finding out who you are. There is so much going on, and that’s what I wanted to write about. So that’s what I’m writing about, digging deep into those things that so many of us can relate to. It can be tough, but it’s just been the most beautiful experience. You’ve got to be vulnerable. And I’m just so excited to put out a body of work that I’m proud of. I can’t wait.

How would you describe the sound of the music on the album?

I would say it is pop, but pop with an edge, pop on its side. It has some EDM in there, it has some R&B in there. That’s the vibe. I would just say a little off-center pop.

I’m low-key obsessed with your latest song, “No Way (I’m F*cking You).” I think the thing that I really like about it is that it might sound like a lot of what “mainstream” pop sounds like, but it stands out because there is a message behind it. So I’m curious as to what was the inspiration behind this song, and how do you interpret the meaning?

So I went on this date with this guy, and honestly before he even gave a f*ck about what my last name was he just wanted to get in my pants. I was just like, “Seriously? Why are all these guys in LA like this?” Like I was saying before, my album is about my stories, and my life in my twenties, and I feel like it’s so impossible to find a quality person, and it’s like these guys are out for one thing. There’s so many people out there like that. When you’re a girl that’s dating a girl who’s out there f*cking around, gay relationships, straight relationships, people deal with this all the time — they just want to get in your pants. I was like, “Nobody is talking about that, and I’m f*cking sick of it.” I wanted to make a song that had a statement and was like, “No. You know what, buddy? I’m going f*ck you when I want to f*ck you on my terms.” And so I got into the studio, and I wrote this song.

I think that’s great. Literally everything you’re saying I’m like, “that’s so true.”

It is. I know you are also the co-host of SiriusXM’s Hits 1 in Hollywood [with Michael Yo]. That’s a daily show, right?

Yes, it’s a daily show. I’m on from 4-7 PM and it’s just kind of crazy. It’s amazing; it’s very cool to be an artist and to be sitting in that room and meeting artists that are coming in. It’s like this artist-to-artist relationship on the show that I hold as my position. It’s just fascinating because so long are the days where you can just be a recording artist or a touring artist. You’ve got to have a lot going on, you know? People are now big on many platforms, on YouTube and music and in films, and that’s the kind of artist I’ve always wanted to be. I don’t just want to be a recording artist — I want to be an entertainer. I want to be in film someday; I am in radio. I have a big appetite, and I think it’s cool to be able to see things from that other side and other perspective as well. It’s awesome.

What is the process like to prepare for the show each day?

I get to my studio about an hour early, and I just prep. Naturally, I have always been a person who is informed on pop culture, so it came very naturally to me. It’s very organic. I speak from my heart, I love the show, I love Hits 1, and I love SiriusXM. It’s just a great opportunity for me at this point.

I just have a few quick questions left. Who would be your dream tour mate and why?

Lady GaGa, hands down. She is a force to be reckoned with. She has been my muse for forever. She is hard working, so creative, so innovative and so inspiring; she can push anyone, and I would just love to be around her creative energy and learn from her.

What do you like to do for fun when you’re not making music or working on Hits 1?

I like to hang out with my family. I love to eat food; I’m a big foodie.

Italian, Greek, or Mexican. Give me a burrito, and I’m a very happy girl. [Laughs] But otherwise I just like laying low. I love seeing films, independent films, things that inspire me. Fashion, just immersing myself in art.

Our website is called Talk Nerdy With Us — what do you nerd out over?

Hmmm… Probably Hello Kitty; it’s kind of odd. I just love Hello Kitty. And my roommate has such a problem with it because I have these big Hello Kitties on my bed, and she’s like, “get those the f*ck off your bed. You’re ruining the apartment vibes” [laughs]. I’m like, “F*CK YOU. I LOVE THEM!” [Laughs] I’m pretty nerdy with Hello Kitty.

Is it just Hello Kitty or is it all of the Sanrio characters?

No, it’s just Hello Kitty. I think I’m pretty nerdy with Japanese culture. I want to be a harajuku girl; like, I love that sh*t; I think it’s so interesting.

I actually am releasing my newest single, which is called “I Never Do,” and it drops July 7. I’m bugging out, and my debut music video comes out the same day on Vevo. I’m just freaking out to finally have some video content out there and to finally have this song out there that I truly, truly believe in and believe in the message. I’m so excited about that; you have no idea. I also have a feature coming out with an incredible DJ/producer called London Future, and that’s coming out very soon as well. I’m going to be shooting that music video soon, going to be putting out my EP this year, going to be touring in January of 2018. But up until then I’ll be doing a bunch of one-off shows and radio shows and yeah, you’ll be seeing me all over the place.