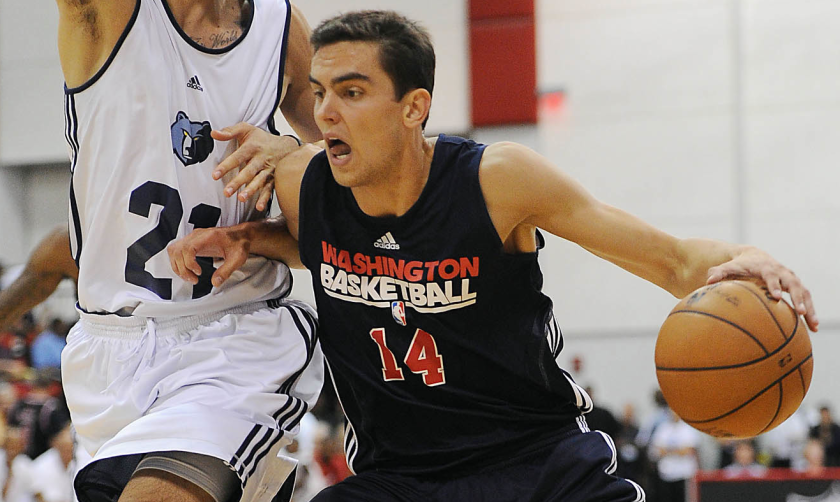 (This article was originally written for WizardsXtra)

When Tomas Satoransky, the Washington Wizards’ 32nd pick of the 2012 draft, signed a four year extension with FC Barcelona in March, everyone believed that he was out of the Wizards’ the picture for the near future.

However, according to an report from Nikos Varlas of Eurohoops, the Wizards are actively pursuing the option of bringing over Satoransky for the 2016-2017 season. He writes, “according to Eurohoops sources from the US, the Wizards have decided to offer a multiyear guaranteed deal to Satoransky and pay the buy out of his new contract with Barcelona. The price of the buy out clause for this summer is $1.5 million.”

The possible deal is something to keep an eye on this off-season, as it carries some interesting salary cap implications for this summer. According to the CBA FAQ:

NBA teams signing international players are allowed to pay a buyout to the player’s team or organization in order to release the player to sign in the NBA. The buyout amount is a matter of negotiation between the player and the international team or organization. NBA teams are allowed to pay up to the Excluded International Player Payment Amount, and this amount is not charged to the team salary. Any amount above the Excluded International Player Payment Amount comes out of the player’s (after-tax) salary, and therefore is included in the team’s team salary.

If Satoransky does join the team this summer, he is expected to give the bench unit a much needed boost right away.

In an interview with CSN Mid-Atlantic, David Pick, one of the leading international basketball reporters, said, “He is already one the toughest, best two-way guards in Europe.”

For FC Barcelona this past season, Satoransky averaged 9.6 points, 4.3 assists, 2.9 rebounds and 24 minutes in 58 games while shooting 38.9 percent from behind the international three-point line.

The 24-year-old also has a skill-set that is transferable to the NBA. At 6-foot-7-inches, he has the length that is necessary to be effective defensively. He also has court vision that is considered to be top notch overseas.

Since the Wizards are looking to getting younger this off-season, adding Satoransky to the roster would make sense as he would be added to the team’s core along with Otto Porter, Kelly Oubre and Markieff Morris in the frontcourt and Beal and Wall in the backcourt.

Of course, there are still plenty of questions regarding his game and ability to be an NBA player. Even though none of this is guaranteed yet, it seems if though Washington is ready to finally give him a chance.